It has been a deeply humbling experience and an honor to represent the 19th Legislative District in the Maryland General Assembly these past four years.

Close to 2,700 pieces of legislation were considered during this session. Here is information about just a few of them. Complete information can be found at http://mgaleg.maryland.gov/webmga/frm1st.aspx?tab=home.

Legislation I Have Sponsored

I personally sponsored ten bills, two of which are particularly important to District 19. One would establish a task force to study how to integrate School-Based Health Centers (HB783) into the public health network. We have two such centers in D19, one at Weller Road Elementary School and one at Northwood High School. They currently provide a full range of services for students whose families cannot afford other health care providers.  After much discussion with the relevant stakeholders, a letter from the Maryland Secretary of Health and Mental Hygiene was sent to the Chair of the Health and Government Operations Committee assuring the members of the General Assembly that the Department will make these goals a priority over the next year and there will be a report with recommendations before the next session. This letter fulfilled the goal of this legislation, so I withdrew HB783. I will be following up with DHMH over the interim to get progress reports.

A second bill, HB710 – Workplace Safety Assessment and Safety Program, establishes a standing committee in State hospitals, nursing homes and long term care facilities to address physical injuries that may occur in these settings because of the affects of Alzheimer’s and related disorders. I had the pleasure of working closely with the Alzheimer’s Association and the AFSCME and the SEIU while drafting this legislation. It was important to make sure this bill does not place blame on the patients or nursing home residents for their illness. Rather, this bill acknowledges that the staffs who directly work with the residents often have the most innovative ideas about how to provide a positive environment which minimizes aggressive behaviors. I am proud to say that the Alzheimer’s Association has decided to use this bill as a template for similar legislation in other States, as well as on the National level.

Other bills I have sponsored and are on their way to the governor’s desk require criminal background checks for certain health care providers (HB 401), defined the role and supervision of pharmacy interns (HB 1218) and allowed the State Board of Examiners to call for a cease and desist order for Hearing Aide Dispensers and Speech-Language Pathologists who are practicing without a license (HB 403).

This year the Maryland General Assembly passed a budget that reflects the values of our State: it continues to fund education, transportation, environmental and public safety priorities. Included in the budget is $2.4 million to fund over 20 development projects in Montgomery County, including $295K in capital projects requested by the D19 Senator and Delegates.

While the budget is fiscally sound and will maintain Maryland’s AAA bond rating, some tough decisions had to be made.  Due to revenues coming in below projection this year, the $300 M overpayment to the pension was temporary reduced to $100 M.  It will be fully restored in three years.  In the meantime, the state will continue to contribute the mandated $1.7 billion to the pension fund. There is no impact to current or future retirement benefits.

I believe an increase to Maryland’s minimum wage will lift millions of hard working individuals out of poverty and give them the financial independence that a 40 hour work week should provide. While some expressed concern that small businesses will be forced to lay off employees, I trust that when Maryland workers have more expendable income they will immediately inject those increased wages back into our economy.  They will purchase goods and services from those small businesses, which will provide opportunities for additional workers.

Fairness for All Marylanders Act of 2014

The transgender citizens of Maryland have been discriminated against for far too long, in a State that has a long and rich history of equal rights for all of its’ citizens. The Fairness for All Marylanders Act of 2014 (SB212) ensures that no one can be denied employment, housing, or access to other public accommodations based on their gender identity. I am very proud to have co-sponsored, and to have worked hard with my colleagues, to see this bill pass both chambers of the Maryland General Assembly.

In response to overwhelming public opinion throughout the country and state the General Assembly fixed and expanded the medical marijuana system, as well as passing legislation to decriminalize possession of small amounts of marijuana. The enforcement of marijuana prohibition uses valuable state resources, as police spend time enforcing marijuana laws when their time could be better used protecting our community from more serious offenders. Furthermore, hearing the passionate testimony from those who suffer from chronic pain and parents whose children suffer from uncontrollable seizures amd could find no other reliable pharmaceutical medication the members of the General Assembly were convinced that medical marijuana must become an available source of relief when recommended by a physician.

This session we finally passed legislation that will resolve the problems created by the Tracey v. Solesky decision on pit bulls.  After that court decision, dog owners and landlords were held liable for pit bull bites regardless of a dog’s history, and landlords increased rent prices and banned specific breeds from rental units.  With the passing of HB 73,   owners may present a defense that there was no prior evidence that a dog was violent, a rebuttable presumption that any dog is inherently violent. This removes the stigma of being dangerous from an particular breed.

I truly appreciate your thoughts, input and feedback.

Please register using the Google registration form link below; you will receive an auto-reply email that will provide you with the Zoom Meeting login info: bit.ly/D19TownHall1020.

Register in Advance for this Zoom Event 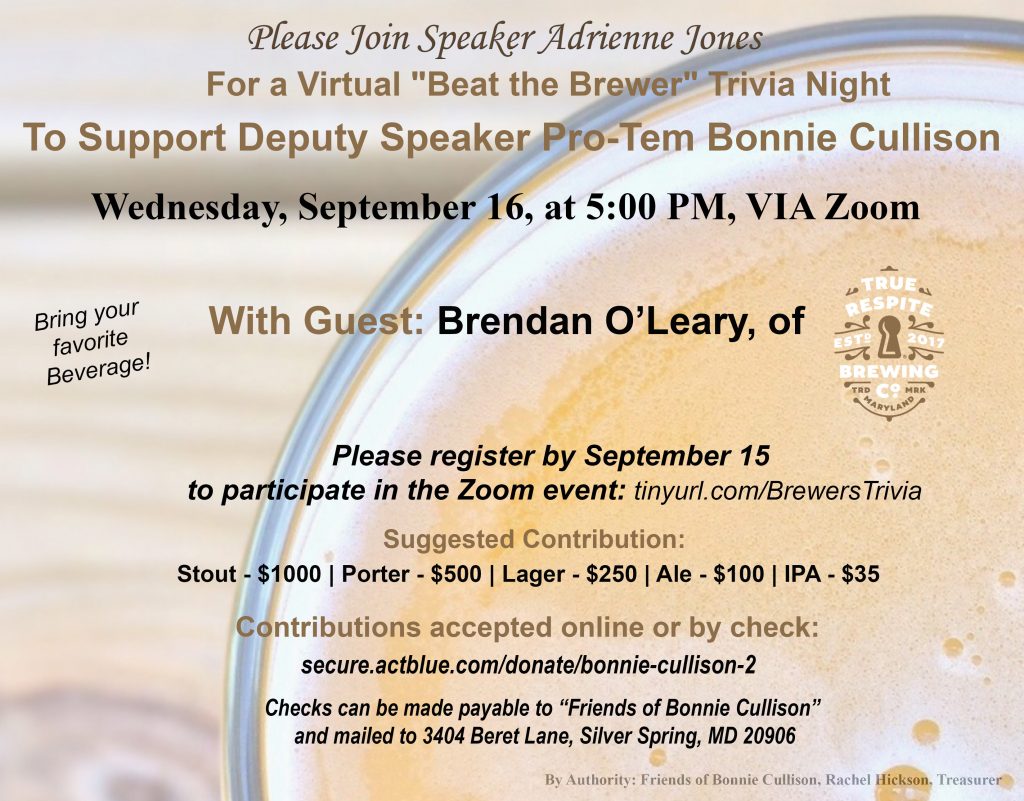